We had a little chat with our folder cover person, jazz star Lina Nyberg, before the Jazzahead Festival where she is about to perform.

Hi Lina! Last year you celebrated 25 years as a jazz artist, congratulations! How does it feel?

It feels really good, I keep finding fields in the jazz landscape that I need to explore and I believe I get more curious and fearless every year, perhaps that´s the blessing of getting older.

You recently released a double album, Aerials, any particular reason for it to be a double?

It is actually the second part of a trilogy of double CD’s. I wrote new music for big band on the first one (The Sirenades 2014), music for string quartet on this second one and it’s still a secret what kind of setting I will work with for the final part. I’m composing new music including a lot of instruments and artistic visions and there will obviously be easier for the audience to get an over all picture of the whole project when the three parts and the 6 CD’s are realized. But for now you could compare the different ideas and types of arrangements on the 2 CD’s in each album, they’re strongly connected in more than one way even though the may seem diverse at first. 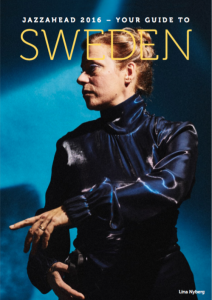 ve been touring in many countries. Where would you say is a good place to start if one wants to play internationally?

To have a strong personal connection in the country your heading for. Preferably with a label, booking agency or an organizer but if you don´t have that it could be a fellow musician, a friend or a music journalist that can help you to find you´re way in that country´s infrastructure.

What are your expectations on playing in Bremen during Jazzahead?

I hope to make some new contacts and broaden my network and also to have a good time with my band musically on stage.